Interview with The Brutal Artist

I've been getting a lot of questions about The Brutal Artist, the mysterious illustrator whose work has so enlivened How To Love Brutalism. So we conducted this email interview. Follow The Brutal Artist on Twitter and Instagram. 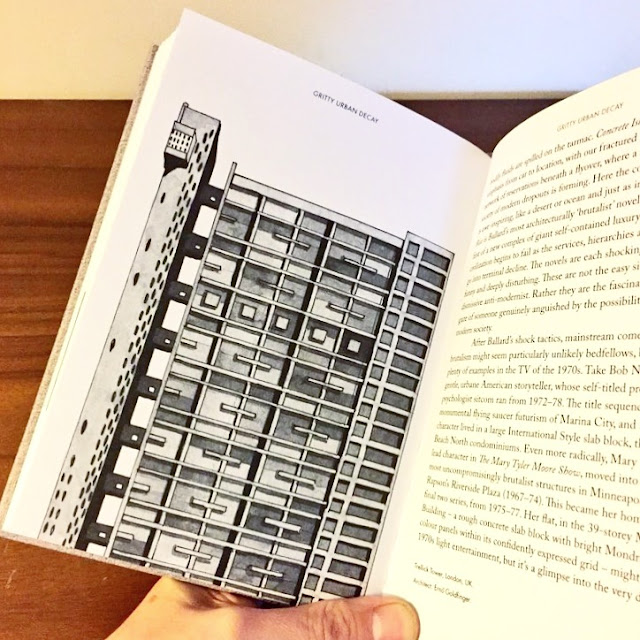 - How did you first get into illustration? Has it been a fascination since childhood or a more recent passion?

I've always been interested in art even as a child, but as the years progressed, it kind of fell by the wayside as other things started happening in my life, until the drawing aspect disappeared completely. It wasn't until 2014 that I started to pick up a pencil again. I was going through a bout of fairly serious depression and had a sudden thought of going back to watercolor (which I used to do all the time) and sketching.

- Did you go to art school or attend art classes, or are you self-taught?

I did GCSE and A level art many years ago, but that's the extent of any formal training. The rest is down to picking up stuff as I went along.

- Do you have a typical way of working? Which mediums do you prefer to work in?

Usually it's sketching out a design in pencil and then going over in pen (unipin 01 if anyone is curious). Once all basic linework is done then I fill in the blocks of black with ink then do the detailed line work.

However, I'll discover something new and then incorporate that. Recently I rediscovered charcoal which was almost joyous. It's taught me to try and relax and I find it somewhat liberating not having to be so meticulous with a sketch (even though it's a habit I struggle with). Laziness has also made me discover the joys of cross-hatching. I was doodling a sketch and really couldn't be bothered to lay out the brushes, pallet, ink and water so I just ended up cross-hatching the shadows and textures in. Although I do need to teach myself to do it properly as some sketches I've done just don't look right. So that's something I'll be working on in the coming months.

- How do you find time to draw? How long does it take you to complete an illustration?

It's difficult. I'll set aside a day in which to work on sketches and when the time comes, I find I'm not in the mood to draw - this is happening frequently lately. But when I am in the mood I'll sit and draw for hours on end. Usually it takes me a week or so to fully complete an illustration. What I'll do is some rough sketches in pen and ink of one building, from several perspectives (what I call "finding the bones of the building". Then I'll pick an angle I really like and then do the final drawing in pen and just black ink. The sketches can take anywhere from 20 minutes to an hour, the final drawing usually takes between 1 - 2 hours.
- You are well known for your architectural illustrations, what drew you to representing buildings? And why the fascination with brutalism?

I could come out with an answer where I extol the virtues of the ideology and aesthetic appeal of brutalism, however I'll go with raw, brutal honesty here. In my twitter bio it reads "I don't know much about architecture, I just like drawing it" and that's the painful truth. I really am ignorant of architecture, to the point where I can't remember which architect designed which building (I have an appalling memory) I have frequently disappointed people on twitter where they try and engage me in an in-depth conversation about architecture and Brutalism in particular. However, I am trying to educate myself as I think I really should know more about the buildings I'm drawing. I've started a collection of books on the subject and I'm slowly working my way through them: Elain Harwood's Space, Hope and Brutalism; Concrete Concept by Christopher Beanland; Brutalism by Alexander Clement and Raw Concrete by Barnabas Calder (oh, and How to Love Brutalism...) so by the end of reading those, I may remember enough not to embarrass myself. 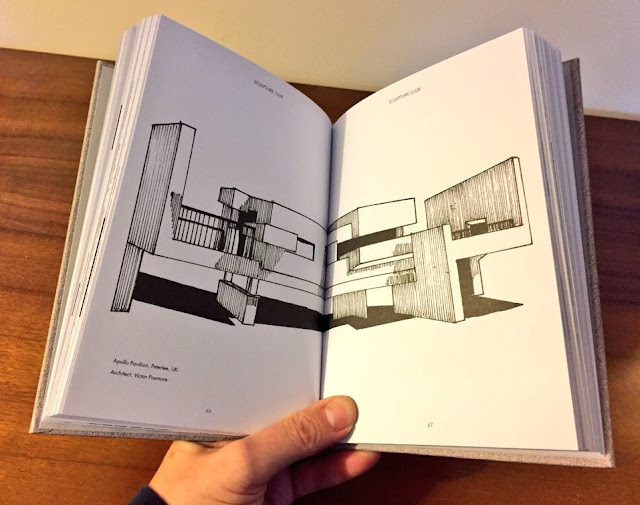 I was drawn to Brutalism back in 2014. I had started to draw after what must be have been a 10+ years absence and tried drawing what I used to draw - nature, botanical etc and I was getting so frustrated with myself. Then I suddenly remembered going through a period of drawing buildings so I did an image search (I can't for the life of me remember what the search term was) and ended up with an image of Zuyev Workers Club in Moscow. It was incorrectly labelled as brutalist (I didn't know at the time that it was actually constructivist) so I searched for brutalist buildings. I found myself liking the style more and more and so focused mainly on that. For me it appealed to the sci fi/dystopian image that fascinated and terrified me as a child.

- Are there other subjects you enjoy drawing too? Is there an unbrutal side to The Brutal Artist?

I used to love drawing botanical watercolours but I now cannot draw anything like that, I'm absolutely rubbish. I do like zentangles and the repetition of marks. My main other creative outlet is crochet and knitting. I knitted two Doctor Who scarves as Christmas presents (to the original pattern) and I had a lot of leftover wool, so I'm currently crotcheting a Doctor Who blanket for the sofa.

- Do you have a favourite piece you have produced?

I have three: the close-up view of The Barbican, The Palace of Assembly and the St Paul's/Barbican mash-up, all in How To Love Brutalism.

- What do family and friends think of your work?

I think there's really only my Dad and one friend who genuinely likes the subject matter (he'll frequently send me links and photos of buildings), everyone else just appreciates the work gone into each piece. My mum HATES Brutalism, so every now and then I'll draw something she'll like! My husband appreciates the work and is extremely supportive. He's been trained well to spot Brutalism in things we'll watch, so he'll screenshot frames (Knight Rider and Wonder Woman have been screen-shotted frequently).

- Have you been surprised by the reaction to your work since you've been sharing it online?

I am absolutely stunned, to be honest. I don't do this for a living, it's strictly a hobby as I'm very much a beginner, I've only been drawing like this for 3 years so I've still a hell of a lot to learn. The reactions have been on the whole brilliant and people have been so lovely in their comments. It's all been very much appreciated and surprising. 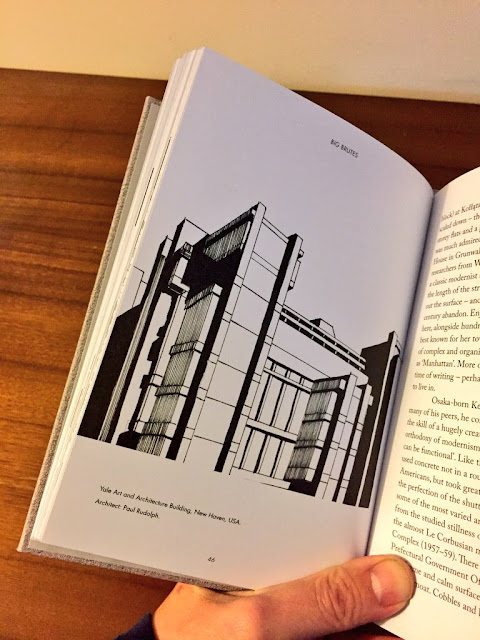 - I was very excited to work with you on How To Love Brutalism. How did you approach the illustrations for the book?

Ditto! The invitation was absolutely a shock!. As to how did I approach the illustrations... with a lot of swearing John, with a LOT of swearing. When I received the list, I noticed there were a number of buildings there that I had been purposefully avoiding due to sheer cowardice such as Marina City, Habitat 67, Torres Blancos and Centre Point. However it dragged me out of my comfort zone and as it happened, those were the buildings that didn't cause me many problems at all.

I spent a couple of days doing image searches for various angles and trying out different perspectives. Then, when I had my final images chosen, I commandeered the dining table (I don't have a studio/specific area). I drew several sketches of each building and these formed the basis for each final piece. Some like The Tricorn Centre and The National Theatre (one of my absolute favourite buildings), I had drawn many times before, so those were no difficulty.

- Do you have any illustration heroes and what is it about their work that has inspired you?

My illustration heroes are mainly from childhood as these are the drawings and paintings that drew me in, imagining myself in the drawings/paintings. Peter Cross illustrated one of my favourite books ever, Trouble for Trumpets. Each illustration is filled with love and crammed with the most ridiculous detail. Kit Williams' Masquerade was a book I used to pour over as a child because the illustrations used to disturb and unsettle me and I used to return to it time and time again. One of my favourites is a guy who I can't even remember his name (maybe one of your readers will know who I mean). I watched a programme years ago with my dad, maybe early 90s, and it featured an artist who drew tiny little thumbnail drawings of fictitious cities with arches, hot air balloons, little towers etc and I remember a lot of cross-hatching. For a man whose name I can't remember, he's been an enormous influence. I'm also a big fan of Molly Crabapple, her work is absolutely exquisite and extremely thought provoking, she takes you places you're not comfortable going to but you end up learning a lot. I'll also give the film Akira (1988) an honourable mention.

- Are there illustrators or artists at work today you would love more people to take notice of?

I've stumbled across many on instagram that I had no idea were out there, most of them are way more known than I am, but still need a bigger following than they have because of their talent. Didouph does these amazing line pieces that are so atmospheric and have an unsettling effect (I love art that disturbs me in subtle ways). There's @albertchamillard who also does line pieces in old ledgers. People also need to check out Taylor Mazer (@tlmazer), that guy's talent is instance. He creates small pieces that on first glance could pass as photographs. I'm also a huge fan of Mandy Payne's (@mandypayne24 on twitter) work on concrete and stone lithography.

- Do you have any advice for someone keen to take up illustration, either as a hobby or professional?

Don't be afraid to go out of your comfort zone in terms of mediums and subject matter. If it doesn't work, who's going to know but you? Don't play it safe.

- Are you pleased with the finished book?

I'm blown away by it. Your prose is engaging and educational and the book design is an absolute thing of beauty. Batsford have done a brilliant job on it. It's been a real honour to be asked to be part of the project.

Thank you to The Brutal Artist.