Researching my green belt book Outskirts I read a lot of stuff on the British countryside and the formation of our protected land, some fantastic, some not-quite-so gripping. This list shows ten (well, eleven, I set the rules and I then immediately cheated on them) of my favourite books on the subject. 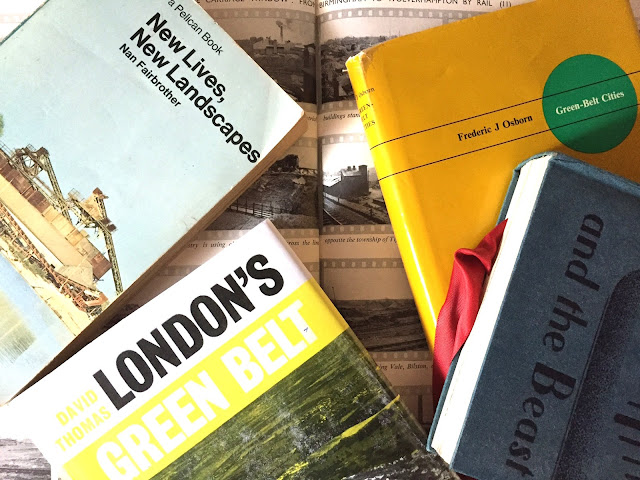 Yeah, yeah, no surprise here. Town planning has never been as epic or charming as in Patrick Abercrombie's 1940s city plans for London, Glasgow, etc. This one is perhaps the most influential on the idea of the green belt – devoting pages to it and with beautiful maps, charts and illustrations, the latter courtesy of Abecrombie's godson Peter Shepheard. In order to write the plan the team drove out to the edge of London and marked on a maps where the buildings ended, and that became the boundary of the green belt. High tech stuff!

2. The Green Belts, by the Ministry of Planning and Local Government, 1962. 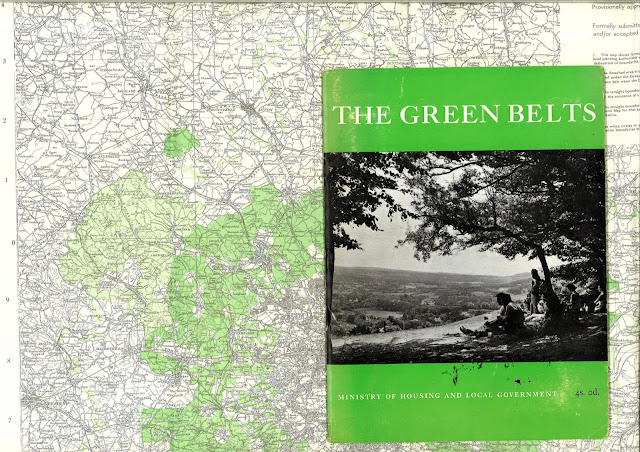 Equally delightful, with great photographs, illustrations and a fold-out map, this booklet produced by the government was intended to celebrate the creation of our green belts. One thing it omits to mention is that in many cases the actual boundaries and existence of them was still unfinished. It would take until the 1990s for all of Britain's green belts to become fixed, by whch time one (Dundee) had already been cancelled and the rest were already under threat of removal too. With pictures of sewage works, country parks and grand houses, the booklet is a delightful curio, something we cannot imagine our spendthrift, petty and mean-minded government producing today.

If you are not entirely delighted by this novel then I would start to worry. It catalogues the very reason for the green  belts' existence, those sprawling interwar suburbs of moderne semi-detached houses. The plot, such as it is, centres on a retired couple getting on each-others nerves in their stodgy Victorian town house. On a walk that used to be in the country they encounter a new estate of tudorbethan houses where a beloved view had been. They begin to fall in love with the idea of it, and so do we as we follow their dream. This wonderful novel has recently been beautifully reissued by Persephone Books.

Two for the price of one here. These are the two academic books exclusively on green belts. London's Green Belt was written in the late 1960s just as many of those boundaries were finally being fixed. David Thomas, a geographer from the University of London, splits the subjects into three sections: the problems of London, the emergence of the green belt as a remedy, and the effects of its arrival. Martin Elson's book is more ambitious, written in the mid-eightes at the time of Patrick Jenkin's hopeless stewardship of the Department for the Environment and soon-abandoned plans to curb the green belt. Elson, a town planner from Oxford Polytechnic, also split his book into three sections: emergence of the green belt, how the land is used, and the future. Both are full of fascinating data but probably not the most fun reads. Although the authors are capable of excellent writing the purpose of their books was informational rather than lyrical. Strictly for academics and planning geeks.

My absolute favourite book of landscape writing. Fairbrother took up landscape architecture late in life, and this book was written only a couple of years before her death. In it she talks about how Britain's landscape had been modernised though new roads, estates, growing cities, and industry, and she wonders how we might best go about balancing the management of our countryside with our desire for the fruits of modernity. It might sound dry, but she is incapable of writing a dull sentence. The book is funny, shocking, gossipy, educated, waspish and moving. I cannot recommend it you strongly enough. She deserves to be read every bit as much as that other great landscape writing Nan, Nan Shepherd. Yes, that's right, click buy, click buy.

Osborn had been one of the founders of the garden city movement, an architect planner friend of Ebenezer Howard who worked on both Letchworth and Welwyn, who then helped in the setting up of the new towns programme after the Second World War. Here he combines both a description of garden city ideals with accounts of the reality of creating these towns, which were each designed to be contained by their own green belts, or to be placed away from large cities on the far side of their broad green girdles. Osborn was by all accounts a charmer, and this gentle tome back this up. It's most interesting because Osborn was heavily involved in the reality, rather than being an observer. Another one for the planning geeks among you. 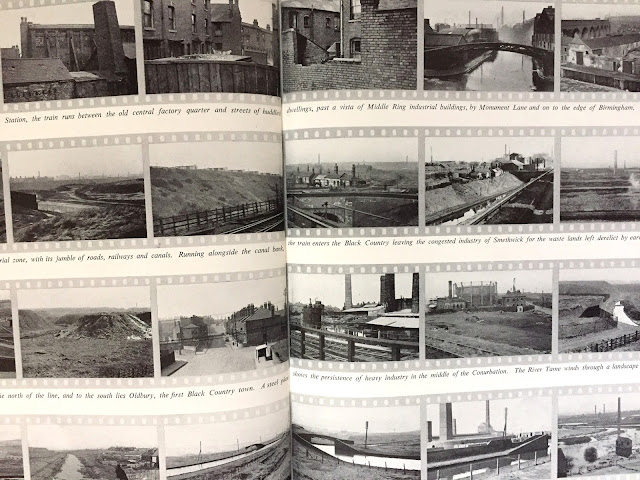 Incredible what you can pick up from second hand bookshops. This is a gem, a report by the West Midland Group into the reconstruction of the Black Country and the area around Birmingham. Their aim was to correct not only the effects of a world war but also that of the industrial revolution, which had so scarred the landscape with pits, quarries, factories and works. It contains a foreword by eminent planner Lewis Mumford, and contributions from the likes of Geoffrey Jellicoe and Thomas Sharp. A hefty hardback, it contains data-heavy maps, charts and plenty of worrying photos of knackered landscape. Most shocking of all are photos from a train journey through the Black Country, from Birmingham to Wolverhampton, a kind of bleak landscape Muybridge. 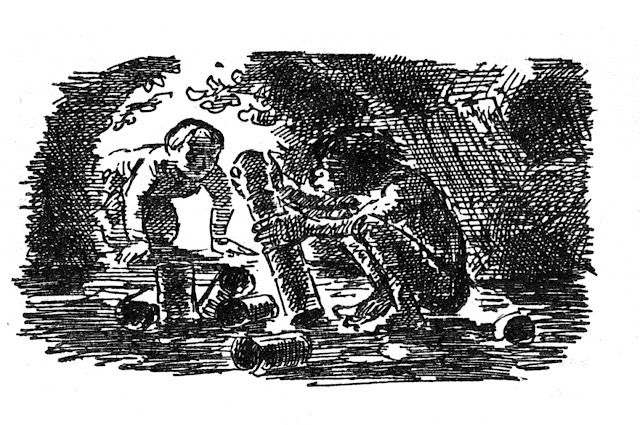 If you're a regular reader of this website, or have dipped into Concretopia, you'll know how obsessed I am with the modernist Span village of New Ash Green in Kent. Clive King was a resident of nearby Ash in the years before the new village was built, and wrote this landmark children's book as a way of making the sleepy area feel more exciting. A local boy falls into a  chalk pit, and into the home of Stig, a young caveman. They have adventures. It was everything I wished would happen to me when I was a kid, and so similar to where I had grown up that it seemed almost possible too. Perhaps there were cavepeople living out there, beyond my school in the chalky countryside? Stig of the Dump is one of those magical books that expanded my imagination and made me into the ardent reader I remain today. Thanks Clive.

Sylvia Crow is one of the most important figures in our twentieth century countryside. She was Britain's first landscape architect, and became famous for her work on the green wedges of Harlow new town. This book is taking on the topical 1950s subject of derelict land, one which was obsessing Ian Nairn and Lionel Brett at around the same time. The difference is, of course, that where the other two produce a great deal of impotent hand wringing, Crowe was actually doing something about it. Trees would be planted, land use deliniated, derelict land reclaimed. Whether it was work for the Forestry Commission, new towns or local authorities, Sylva Crowe inspired a generation of people – particularly women – to take on the seemingly impossible issues of our countryside and improve things for the better.

10. Britain and the Beast, edited by Clough Williams-Ellis, 1938

This is a cracking read. Bleak, angry and riddled with all sorts of class issues, it tells us so much about the culture of the interwar period. Edited by the eccentric architect of Portmerion, it's a collection of essays on the state of our countryside, then under threat from our expanding cities and the supposedly loutish folk who spill from them. Contributors include Bloomsbury Group economist John Maynard Keynes, professional nostalgist EM Forster, farmer AG Street and Brains Trust gobshite Cyril Joad. Pretty much every essay is rude and furious, usually at the expense of 'townsmen' wrecking the country. My favourite essay is 'Laughter in the South-East' by novelist Sheila Kaye-Smith, in which she recounts with horror a meeting at the Isle of Oxney in which attempts to protect some of the farmland from building was laughed off. Her account of being was shaken by the attitude of locals, exclusively concerning the economy rather than the natural environment, remains a powerful read. A rash of books of this ilk were produced in this period – indeed many of the contributors produced whole books dedicated to it – but this one gives a flavour of privilege and bigotry alongside well meant concerns about landscape damage and lack of planning. Read with caution!
Labels: books Outskirts