The Smithsons on Housing is a remarkable film. I'm sure you've probably already seen it. A half hour BBC documentary made in 1970 by experimental writer and film-maker B. S. Johnson on the uncompromising modernist architects. He films them in intense close-up, with no conversational niceties to warm up the film. Neither one smiles or talks to the other. At one point Alison is seen wearing a silver space suit and Peter a silver tie, like a late 70s synth duo. 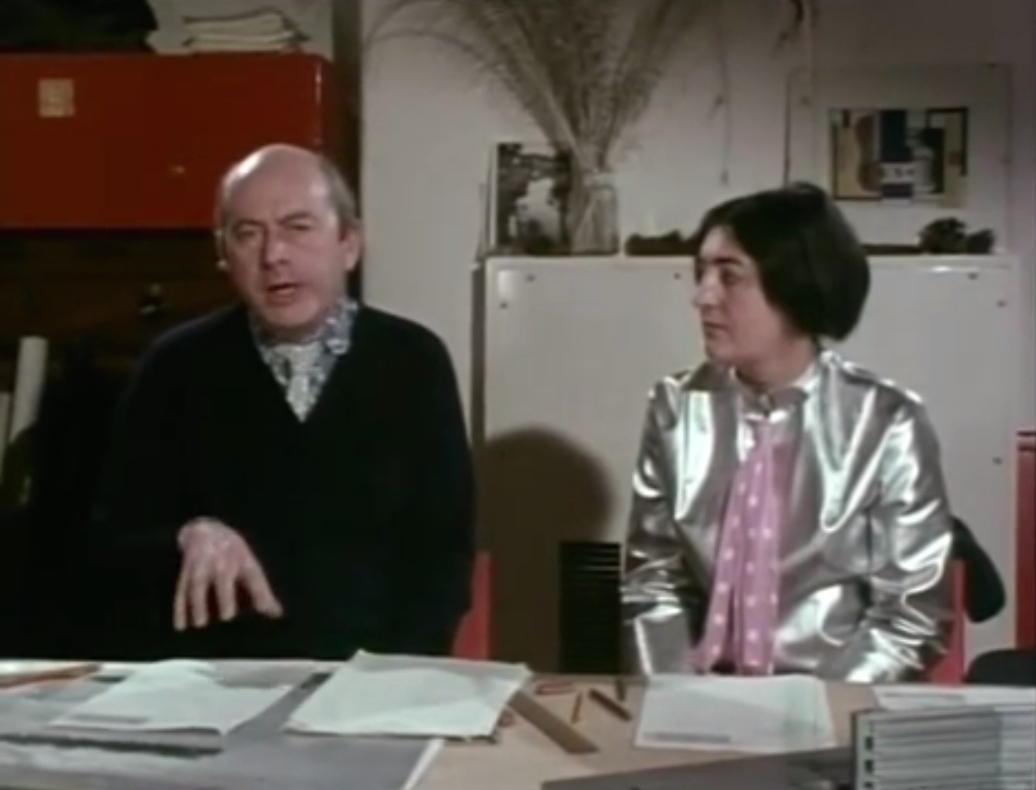 They are talking about Robin Hood Gardens, their new estate in Poplar which is being built. In one of the great deadpan moments in TV history a glum-looking Peter Smithson says it will be 'a model of a more enjoyable way of living'. They tell us how they have fought off the curse of the car, including traffic noise from the Blackwall Tunnel, and how the two blocks split the site 'like a kipper'. Their great patrician modernist outlook is laid out here, the theories, abstract thoughts and romantic notions that drive their work.

Alison is obsessed with the landscape. From the site you can see out onto East India Docks. The documentary beautifully captures the landscape which now has been transformed into Docklands, and then was post-industrial dereliction. Alison recalls the East India Dock she saw when they started work: a calm sheet of water, a few ships. 'Now it's being filled,' she says. But she has a vision for regeneration, to turn the u-bend in the river into a place for fun and recreation. 'We could have a new Venice in London,' she says.

Robin Hood Gardens felt strange and a little uncanny to me, much as the Smithsons do in the film. There was the huge Quatermass and the Pit-style mound in the middle, which felt like it should have had much more significance that it did. The complicated framework of the flats was like a sculpture made from the different planes of a cheese grater welded together. Unlike Park Hill in Sheffield, which feels more open and expansive, everything in Robin Hood Gardens felt secret and hidden away. They even did well to reimagine the famously creepy Victorian streets of East London as equally creepy modernist streets in the sky. Peter's obsession with vandalism would be prophetic - it was wrecked for many years. Yet by the noughties the residents were keen to stay, to see it refurbished and looked after.

The whole film feels remarkably prescient. 'Unless a building outlasts its first users we get no body of choice. no pool of housing from which people can choose how to live where they want to live' says Alison. 'And more important, you get no build-up of a comparable body of quality.' With the building now due to be flattened and the plans for a bland nothing to replace them, their melancholy sense in the documentary that buildings aren't looked after became one of the reasons it would eventually be knocked down. 'The maintenance of quality objects is a real cultural neccessity,' says Alison in her silver jump-suit. This is real ghosts of the future stuff, the kind of cry for help people find in sci-fi movies on recordings from before the apocalypse. A final mayday from doomed pioneers.
Labels: 1970s Brutalism London Robin Hood Gardens Smithsons