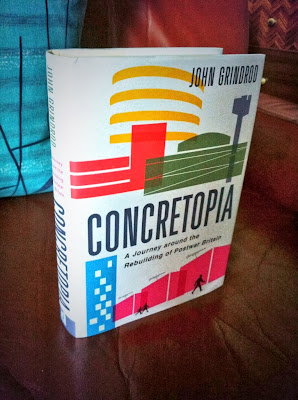 Concretopia: A Journey Around the Rebuilding of Postwar Britain has hit the shops, in hardback and ebook. You can read a sample chapter here.

It's really quite a peculiar feeling now that it's out and people are reading it and passing comment. I'm sure if I started the book now, with all that I now know, it would be an entirely different thing, but the book grew up alongside the journeys and conversations I had with people along the way, and so it is what it is. It's had some really nice reviews so far:

'Concretopia could pleasingly be read by anyone in Britain who lives in a postwar Modernist structure and has a love-hate relationship with it. Part-travelogue, part-history, Grindrod’s account walks us through — in touchingly precise detail — the decisions that led to such buildings as the BT Tower, the Barbican, Coventry Cathedral and the blocks of New Ash Green in Kent. The book didn’t convince me to love postwar British architecture, but it led me to admire the humanity of the author and to respect the good intentions of architects who meant well.'
Alain de Botton, THE TIMES

'Grindrod is inventive with words and frequently alights on delightful and perceptive images. A set of towers about to be demolished is “like a gang of anxious meerkats scanning a plain”, while, most delicious of all, Centre Point in London is “an upended pack of bourbons sitting on a saucer”.'
Phillipa Stockley, SUNDAY TELEGRAPH

'Wonderful ... If you’ve ever wondered who gave planning permission for the serried ranks of concrete blocks you pass on the way to work, read Concretopia and lay the foundations of a new way of looking at modern Britain.'
Rebecca Armstrong, INDEPENDENT ON SUNDAY

'A brilliant book: a vital vade mecum for anyone (not just students of architecture and town planning) interested in Britain's 20th-century history'
James Hamilton-Paterson, author of EMPIRE OF THE CLOUDS

'A powerful and personal history of postwar Britain. Grindrod shows how pre-fab housing, masterplans, and tower blocks are as much part of our national story as Tudorbethan suburbs and floral clocks. It's like eavesdropping into a conversation between John Betjeman, J.G. Ballard and Jonathan Meades.'
LEO HOLLIS, author of CITIES ARE GOOD FOR YOU

'Fascinating . . . it's all here, from the Poulson scandal to abandoned ring-roads and vanishing industry . . . A great insight into the way things turned out the way they did.'
WALLPAPER MAGAZINE

'Never has a tour from Croydon and back again been so fascinating. John Grindrod's witty and informative tour of Britain is a total treat, and will win new converts to stare in awe (or at least enlightened comprehension) at Crap towns and Boring Postcards.'
CATHERINE CROFT, Director, Twentieth Century Society

'With a cast of often unsung heroes – and one or two villains – Concretopia is a lively, surprising account of how Britain came to look the way it does.'
Will Wiles, author of CARE OF WOODEN FLOORS

'Grindrod is as interested in the people  as the buildings, and this distinguishes the book from conventional architectural histories. ... This approach adds warmth and personality and makes the 450 pages inviting rather than intimidating. ... It's an accessible introduction to the key events and buildings of the period for any student.'

For the Facebook inclined, there's a page with news about it here.

Thanks to everyone who's bought a copy, I really do hope you enjoy it.